View cart “Colloidal Gold – 4oz” has been added to your cart.
Filter Thousands of people from all walks of life have benefited from Etherium Gold. Many athletes, especially those practicing martial arts, love Etherium Gold because it tends to promote greater mind-body integration.*

Etherium Gold is used by many for their spiritual work, taking it before meditation or prayer. Dr. Richard Gerber, author of Vibrational Medicine, stated, “Etherium Gold powder is well suited to individuals beginning to open to higher consciousness and a path of spiritual transformation.”

One of the Etherium Gold benefits is that it works well whenever increased mental focus is essential.* This can be before an important career meeting or event or simply when wanting to pay more attention to a teacher or a public speaker. Etherium Gold benefits also include the ability to stay more focused and attuned whenever you want to be more present in any situation.* Sir Laurence Gardner, author of The Shadow of Solomon, Magdalene Legacy, Blood Line Of the Holy Grail, and Lost Secrets of the Sacred Ark, is considered an expert in the historical use and alchemical preparation of white gold from numerous civilizations and stated, “I have reviewed the research on Etherium Gold, and the clinical studies clearly show a positive enhancement of brain function.”

By helping high beta wave activity and alpha-wave activity, Etherium Gold has helped many with mild absentmindedness and nervous irritability. Sean Adam, Research Director of the Alpha Learning Institute in Lugano, Switzerland, believes that “anyone who wishes an improved cognitive function with less stress would definitely benefit by using Etherium Gold.”* 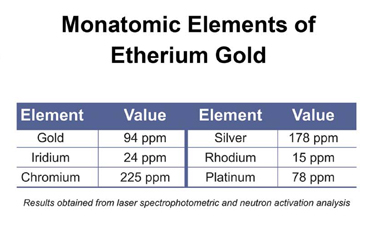 Etherium Gold was discovered while researching an herb. The herb, Chamaebatiaria millefolium, was generating many success stories. Since this herb is not known to have any physiological benefit, researchers were quite perplexed as why it was having such a profound effect. It was determined that the ground where the herb was being harvested was rich in monatomic gold, and that its root structure, absorbing these monatomic elements into its cellulose was responsible for its benefits.

Geologists from the University of California in Davis studied the site and determined that there had been a meteorite impact there 11,600 years ago. David Hudson, regarded by many as the premiere researcher of monatomic minerals, has always stated that the highest concentration of natural monatomic minerals is in a volcanic eruption. What these two events would have had in common is the tremendous generation of heat.

Etherium Gold, often referred to as naturally occurring monatomic gold or white gold, is purified from an ancient seabed in an area that geologists have determined was the site of a meteorite impact that happened 11,600 years ago. This impact generated intense heat, producing an abundance of monatomic elements.

In 2003, the Alpha Learning Institute in Lugano, Switzerland, performed a clinical analysis of Etherium Gold’s effect on the brain with 40 subjects. This study clearly shows that Etherium Gold has an effect that moves the electrical waves in the brain from fewer beta waves to more alpha waves in all subjects.* 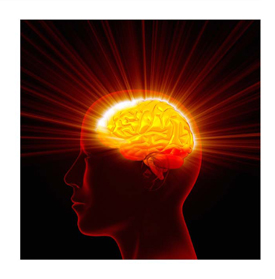 According to Robert Dallas, PhD., Director of the Mind Spa stated: “The most obvious and consistent results occurred in the EEG measurements after taking Etherium Gold. In 90% of the volunteers, brainwave frequencies tended to balance out and all frequency bands showed greater activation”.*

As Dallas further observes: “We could casually say that people with high theta activity (as compared to beta) are considered to be “right brained,” (creative, meditative, artistic, spatially oriented). People with high beta activity (as compared to theta) are considered to be “left brained,” (logical, mathematically inclined, and linearly oriented). Etherium Gold balances the differences in the strength of these frequency ranges between the right and left hemispheres of the brain.*

Dallas goes on to state: “This preliminary study shows clear evidence that there is a positive impact, at least temporarily, through the administration of Etherium Gold. The indication is that it somehow provides an environment whereby the brain moves toward a state of balance and homeostasis”.*

*These statements have not been evaluated by the Food and Drug Administration.
This product is not intended to diagnose, treat, cure, or prevent any disease.