Mud flood in the 19th century?

I was thinking just the same thing with the American civil war. Didn’t realise there was another USA war in 1812. Can’t be a coincidence. There is an interesting thread on stolen history where one poster who has researched the American civil war a lot is finding great difficulty in actually finding a photo of confederate soldiers. There is one of them in the distance rebuilding bridges. Lots of the photos show soldiers rebuilding bridges. I wonder if it really had to do with Earthquake damage. Not sure.

There is a great consipiracy theory on Abraham Lincoln being the same guy as the confederate leader Jefferson Davies. They look similiar and photos of Lincoln look like his is wearing a mask. It wouldn’t surprise me at all if the civil war was a cover for federal rebuilding and the actual federalisation of the USA, rather than the late 18th century. There are also so many fake photos on the civil war that you have to wonder what was really going on. 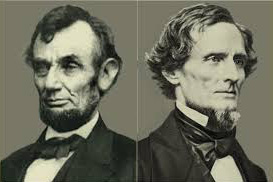 Great video on oddities on Abe Lincoln. To me it looks like he is wearing a mask. You can see the flap next to the ear and below it like he has just pulled a mask over his face clipped on to his ear. None of this would suprise me as I bet they had body doubles back then and this was one way to do it.

I have no doubt the visible (especially) rulers of whatever section of the system they manage (Popes, Queens, Kings, Prime Ministers etc) will have had body doubles as standard from the start (whenever that really was) and their Producers (intel) have had the visible rulers’ disguises upgraded until they reached their technological zenith in robotoids, clones holograms etc. In that photo of Lincoln it does look like a mask of some sort.

The bridge building/rebuilding is very interesting. It would be one of the first things a “Country Planner” would need to get done post catastrophe and a war narrative is perfect to get away with it. Flood the media with the usual political bickering garbage; create tension among the working classes that will create the dialogue which will then result in the perceived reality. 20 years down the line the few questioning the narrative at that time are drowned out in a sea of official “history”. “X moved by night 20 miles north to reach [insert name of bridge] before Y’s troops were able to arrive there…” So many stories are like that in history going all the way into the Middle Ages and before, yet there is no evidence that any of that actually happened. You also have the Jesuits and Freemasonry all over the American Civil War like a rash so you have the perfect groups to control it. Have you seen the “coincidences” between the Lincoln and Kennedy pantomimes? Here it is for anyone not aware:

What are we dealing with here? TPTB have formulas that they use time and time again because they work and IMO you have come across another: use a “war” as a cover to kill 2 birds with 1 stone: explain the damage (including casualties) caused by [insert catastrophe] “before” the “war” and then have the official historical narrative weave a tedious tale long enough to put you to sleep and to camouflage the extent of the rebuilding process “during” the “war”.

I think you mentioned that we were possibly looking at extreme Earth expanding earthquake/flood events in the early 1600s and the end of the 1600s. (i know there are others also, but just concentrating on those in particular at the moment) In the context of the UK, we had the British Civil Wars (1639-51) and the Jacobite “uprisings” in “…1689, with major outbreaks in 1708, 1715 and 1719” (wikipedia). These wars/uprisings are roughly post catastrophe and do they have building going on during them? Yes they do, especially in the early 1700s in Scotland:

The Military Roads were built in the 1700’s to allow Government forces to deploy rapidly to key locations in the Highlands if there was a Jacobite uprising. More than 250 miles of these roads were built under the command of General Wade linking forts in the Great Glen between Fort William and Inverness and with the road network in the south of Scotland at Dunkeld and Crieff.

His successor, Major Caulfeild, though less well-known, added a further 800 miles to the network. Another road was built between Carlisle and Portpatrick to facilitate troop movements to Ireland.

Apart from some fairly limited road building in the middle ages, these were the first roads to have been built since the Romans. Indeed one suspects that some people at that time saw these roads as the continuation and completion of the work of the Romans.

Despite having been built less than 300 years ago they were ignored and neglected until fairly recently and although obvious on some stretches had to be searched for on others; there are still locations where the course of a road is not clear. Fortunately attitudes to the roads have changed: sections of the Corrieyairack road and some bridges are now scheduled monuments and local authorities and heritage organisations are well aware of their historic value.

This could also be the native faction that were the survivors of the 1600s events and were recalcitrant against the new landlords. There appears to have been a 1716 Disarming Act passed which “…outlawed anyone in defined parts of Scotland from having “in his or their custody, use, or bear, broad sword, poignard, whinger, or durk, side pistol, gun, or other warlike weapon” unless authorised”.(the more things change…) However, the Jacobites were perhaps not as rebellious to the extent portrayed in history and it was used as a cover.

Just briefly on Scotland: so it used to have Horizontal orientation on a few of the old maps and I think it was Matthew Paris’ map from the middle ages (1300 ish), its only connection to England was a bridge. The political differences in the context of all of this are PATHETIC. People do not like to spend time looking at stuff like this because they have invested so much emotionally into politics etc that to have that rug pulled from beneath their feet, the individual pride cannot take it.

When you mentioned this is like a skeleton key for history, you ain’t kidding. A can of worms is opened each time I look at any event from the Middle Ages to present.

You also have a copious amount of “wars” going on at that time.