The future looks grim after 2 years of devastating B.C. wildfires

For decades, scientists have predicted that B.C. would experience longer, more intense wildfire seasons as the climate warms. But the destruction of the last two years is still a bit surprising.

According to Chilliwack fire ecologist Robert Gray, the scale of the wildfire emergencies we’ve lived through in 2017 and 2018 wasn’t expected for decades.

“What we thought was going to be an average condition in 2050, we’re starting to see those conditions coming a lot sooner,” Gray told CBC.

“There’s been a lot of discussion in the scientific community about really changing what we think the future is going to look like.”

In all, more than 12,000 square kilometres of B.C. landscape went up in flames last year, making it the worst wildfire season on record.

Any hope that was an anomaly has been blown away during the 2018 season, which is now the second worst on record. By Monday morning, more than 9,640 square kilometres of the province had burned — a total that will only climb in the days ahead. 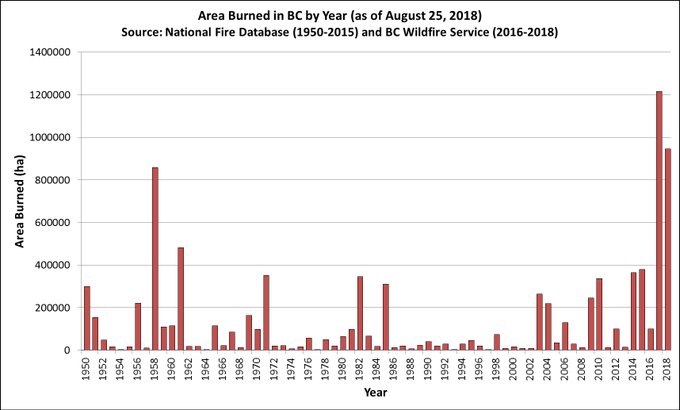 These back-to-back record seasons mean that researchers will have to re-examine the models used to predict future wildfire conditions, Gray said.

“Our models are only so good. It’s extremely complex trying to model climate change,” he said.

The wildfire experts who spoke with CBC say there are several reasons the situation has worsened in recent years.

There’s been a lack of both controlled and traditional First Nations burning in recent decades, which has left much of the province dense with potential wildfire fuels. There’s the fact that we’ve aggressively fought most fires, rather than letting them run their natural course.

But a change in weather patterns has pushed things over the edge, according to Mike Flannigan, a professor of wildland fire at the University of Alberta.

“Colleagues and I have been saying for years that the increase we’ve already seen in the area burned across Canada — a doubling since the early 70s — is due to human-caused climate change,” he said. 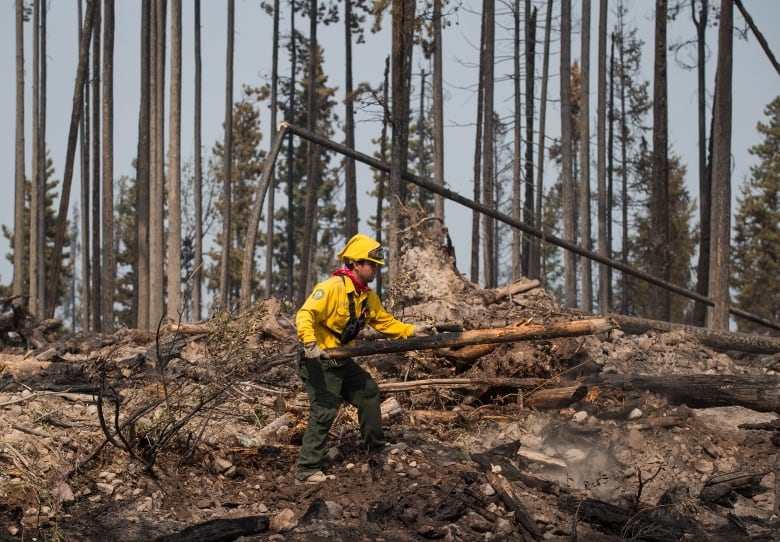 Firefighter Christian Garcia of Mexico moves a burnt tree to get at hotspots in an area burned by the Shovel Lake wildfire near Endako, B.C. (Darryl Dyck/The Canadian Press)

Warmer weather brings longer wildfire seasons and more lightning, while the atmosphere gets better at sucking the moisture out of plants and dead wood, researchers say.

The end result is both bigger and more intense fires, and Flannigan’s research suggests a significant increase in wildfire intensity in recent years.

“This is really key, because as fires become more intense, they’re difficult to impossible to put out,” he said.

For the last two years, the hot and dry weather that has allowed so many large fires to develop in B.C. has been driven by a blocking ridge of high pressure that’s been stuck over the province for much of the summer.

The air beneath that ridge sinks, warms and dries, creating perfect conditions for a “raging inferno” if it sticks around for a week or more, according to Flannigan.

That stagnant pattern has developed because the jet stream is weakening as the Arctic warms, a phenomenon that could spell more bad news for B.C., he said.

“There is a suggestion [in the] research that … because of the way the Arctic ice is melting, that a favoured position for this ridge is along the West Coast. If that’s the case, then odds are that we’re going to see a lot of bad fire seasons in British Columbia,” Flannigan said. 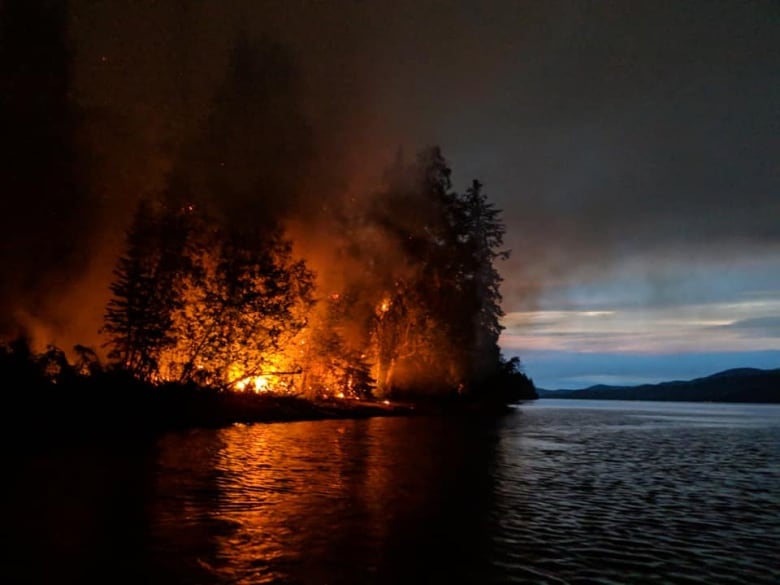 And so, B.C. is stuck with the question of how to better prepare for the years ahead.

Limiting the release of greenhouse gases might be a good long-term option, but both Gray and Flannigan point out that any positive impacts won’t be felt for several decades.

In the meantime, they would like to see more measures like controlled burning, thinning out forests around communities, preparing homes and businesses through the Fire Smart program, developing early warning systems for wildfires and allowing more fires to burn if they aren’t threatening human homes, lives or infrastructure.

“We have to learn to live with fire, coexist with fire. There’s no other solution,” said Flannigan.

‘It was short-term thinking’

Unfortunately, B.C. has been lagging on taking preventive action, according to George Abbott, co-author of the independent review of the 2017 flood and wildfire seasons.