It’s rare that something new is discovered in one of the world’s oldest buildings, but that’s what scientists just did.

A previously unknown, hidden internal “void” was recently identified in the Great Pyramid of Giza. The research was published Thursday in the peer-reviewed British journal Nature.

The discovery was made using cosmic-ray based imaging, which shows how modern particle physics can reveal new information about ancient structures.

The Great Pyramid, or Khufu’s Pyramid, was built during the reign of Pharaoh Khufu (Cheops), who reigned from 2509 to 2483 B.C. It’s the only one of the original seven wonders of the ancient world still standing.

Two additional nearby pyramids were built for the pharaoh’s son and grandson. 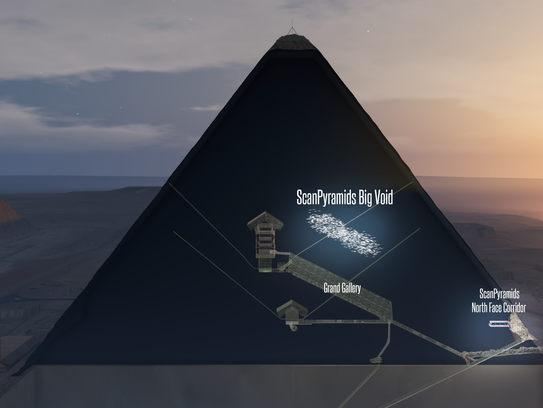 An artist’s conception of the void (white area) inside the pyramid. (Photo: ScanPyramids mission)

There is no consensus on how the monument was constructed, though many theories have been proposed over the centuries.

To learn more about the internal structure, scientists imaged the pyramid using muons — subatomic particles that are by-products of cosmic rays and can penetrate stone.

Muons take distinct paths when moving through stone or air, making it possible to distinguish cavities from solid formations.

This allows scientists to “see” inside the pyramid to areas that are not otherwise accessible.

“Cosmic-ray muon radiography allows us to visualize the known and potentially unknown voids in the pyramid in a non-invasive way,” the authors wrote in the study.

The scientists said the void was about 100 feet long and is located above the pyramid’s Grand Gallery.

While no one knows the role of this void, the study said, it’s the first major inner structure found in the Great Pyramid since the 19th century.

Egypt’s former antiquities minister and famed archaeologist Zahi Hawass was somewhat dismissive of the new research, saying that the area in question has been known of for years and thus does not constitute a discovery. He has long downplayed the usefulness of scans of ancient sites.

“The Great Pyramid is full of voids. We have to be careful how results are presented to the public,” Hawass said.

Regardless, the scientists in the study said it’s really only the beginning of the research: “The detailed structure of the void should be further studied,” the study said.

“Overall, this discovery shows how the methods developed in particle physics can shed light on one of the most important heritage buildings, and it calls for more interdisciplinary collaborations to help understanding the pyramid and its construction process.” 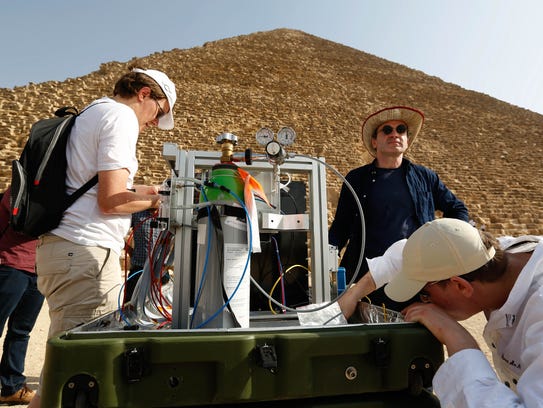 The muon telescope was set up in front of the pyramid’s north face. (Photo: ScanPyramids mission)