What If Everything You Were Taught Were A Lie?

There is a war going on right now and it doesn’t involve guns or the military industrial complex.

It’s a war on consciousness and most people are clueless that it even exists.

Ultimately, the education system can be blamed for feeding us propaganda and forcing us to regurgitate it so we can “fit in” with the rest of society.

Our public school systems are set up to get the students primed for economic slavery without ever offering courses that allow to students to think creatively or freely.

If you trace the companies who print our children’s textbooks, you’ll find a Zionist agenda behind them all.

For example, George W. Bush’s grandfather, Prescott Bush, was arrested for funding both sides of World War II, yet we never learned this in school.

Why?  Because had we learned this, NEITHER Bush would have been elected president for having a traitor in their lineage. 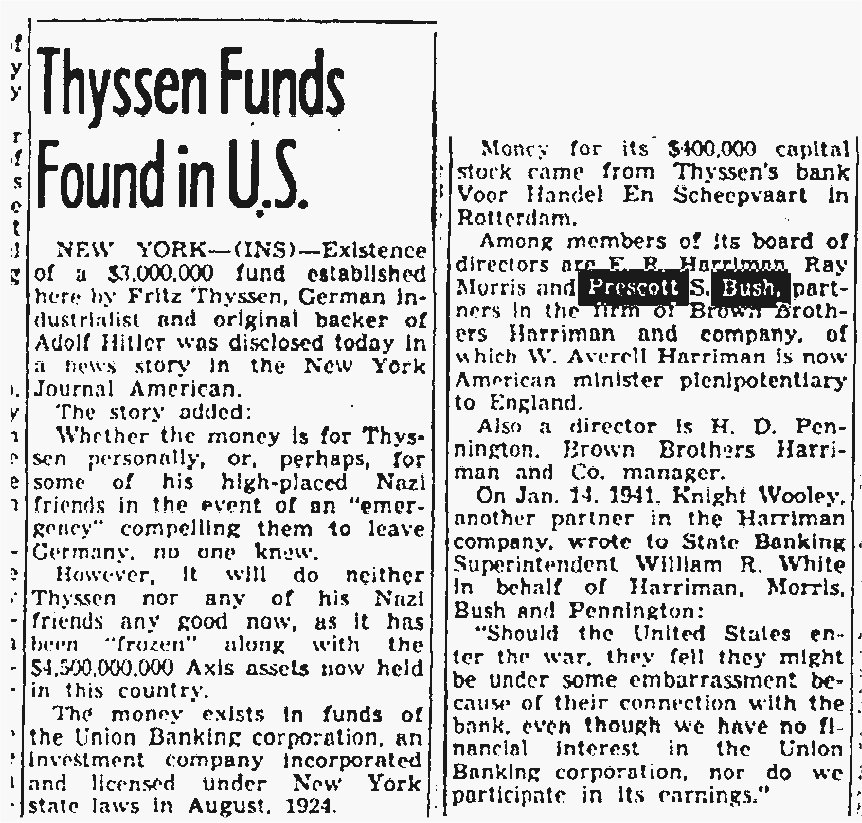 We are taught about Darwinism and how man evolved from ape but if this were true, then why are there still apes?

Granted some things that we learn in school are the truth, such as math, music and some science but our TRUE history has been kept from us for reasons of subservience, control and conformity.

In all forms of education, there are still perpetual references to “fossil fuels” including at the college level.  How ridiculous is this?  Oil is abiotic, which means it replenishes itself, yet we are draining the planet of a lubricant that serves no other interests other than economic.

For example, in the late 1980’s, Stanley Meyer invented a car that could go from coast to coast in the United States on 21 gallons of water.  He was offered $1 billion from the automobile industry for his invention but turned it down because he wanted this idea to go to the people.  Shortly afterwards, he was poisoned to death and the invention has been hidden from us ever since, yet our children are not learning about inventors such as Meyer in school, nor are they being encouraged to develop alternate fuel sources.

Our children are inevitably asked, “What do you want to be when you grow up?”  Their answers become conditioned responses in various forms of economic subservience instead of what they truly would like to do.

A better question to ask them, once they understand the concept of money is, “If there was no such thing as money, then what would you like to do with your life?”

Surely, the fry cook with a high school education would not still be making french fries at a fast food “restaurant”.

Recently, many websites have been accused by the website, PropOrNot, of being “Fake” News outlets for Russian Propaganda, including this website, In5D.com. ANY website that exposes the United States tyrannical and oppressive agenda is most likely considered to be Russia propaganda because they are the websites that QUESTION EVERYTHING!

Because of the Fake News agenda, the mainstream media has been scrutinized on a daily basis for the REAL fake news they deliver.

It’s become blatantly obvious that the mainstream media and the military industrial complex are the true propagandist conspirators.

The following is proof about how propaganda is used against the people in the United States:

Sec. 501. (a) The Secretary and the Broadcasting Board of Governors are authorized to use funds appropriated or otherwise made available for public diplomacy information programs to provide for the preparation, dissemination, and use of information intended for foreign audiences abroad about the United States, its people, and its policies, through press, publications, radio, motion pictures, the Internet, and other information media, including social media, and through information centers, instructors, and other direct or indirect means of communication.

(b)(1) Except as provided in paragraph (2), the Secretary and the Broadcasting Board of Governors may, upon request and reimbursement of the reasonable costs incurred in fulfilling such a request, make available, in the United States, motion pictures, films, video, audio, and other materials prepared for dissemination abroad or disseminated abroad.

According to Michael Hastings: “The new law would give sweeping powers to the State Department and Pentagon to push television, radio, newspaper, and social media onto the U.S. public.”

“It removes the protection for Americans,” says a Pentagon official who is concerned about the law. “It removes oversight from the people who want to put out this information. There are no checks and balances. No one knows if the information is accurate, partially accurate, or entirely false.”

Remember this fake “footage” from the Gulf Wars?

Fake news and propaganda. This is why the viewership of television and newspaper outlets has dropped significantly and is also why people are turning to alternative news websites for the REAL news that the mainstream media FAILS to report. 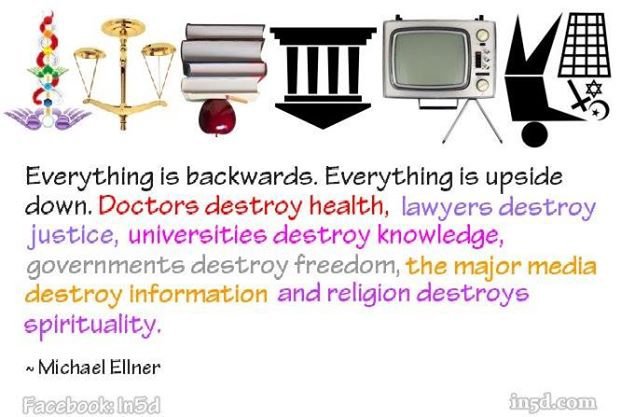 Out of place artifacts

There are literally thousands of “out of place artifacts” that show how we have been here MUCH longer than the official story of both evolution and the bible, yet no high school or university will come near to approaching this topic because it would blow the lid off of all religions.

For example, in Illinois, a well bit brought up a 200,000 year old bronze coin from a depth of 114 feet just outside Chillicothe, Illinois. According to the Illinois State Geological Survey, the deposits containing the coin are between 200,000 and 400,000 years old.

If our true history was revealed, it would cause every system of education to rewrite history and would make the professors teaching “history” look like idiots, so it’s much easier to suppress the truth than to admit they were wrong while killing religion.

In the beginning… there was religion and government

Fake news has been going on for millennia. It is blatantly obvious that religion has been teaching either half truths or full out lies, right from the start.

According to the Christian bible, God created Adam and Eve and told them to be fruitful and multiply.

Based under this premise, we would all be the products of incest.

The bible dates back to approximately 6,000 years ago.  Assuming God created everything at that point in time, then there shouldn’t be any fossils older than 6,000 years of age.

In Genesis 1:26, it is stated, “Let US make man in OUR own image…”. Who is US and OUR?  Some religious zealots will say it’s the Father, son and the Holy Ghost, but this was LONG before the “son” was conceptualized, let alone Adam or Eve.

Another example would be Noah and his alleged gathering of every pair of animals on the planet.  How did he gather animals that were not indigenous to the Middle East, such as polar bears, penguins and sea lions?

Most people have an equally hard time understanding that both religions and governments will lie to you in order to fulfill an agenda.

In religion, look no further than several clergy members of the Roman Catholic Church who admitted that the fictitious hell does not exist.

In government, look how Hitler burned down his own Reich stag building and blamed the communists in order to incite war.  Many people believe the same template was used for 9/11.

The closer you look, the more you’ll find that religion is in bed with the government as both are about controlling the masses through subservience, control, and conformity while neither encourage free thinking or questioning the official stories.

Most people seem to have the attitude that if a talking head on an official news station, such as CNN, says something, then surely it must be the truth.  A CIA whistleblower has already admitted that the news has been scripted for decades in order to influence public opinion.

An article entitled, ” Why is the Obama Administration Putting Government Monitors in Newsrooms,” shows how there will never be “fair” and “unbiased” news reporting in the United States.

The television shows that people watch are either so mundane or intellectually draining that you’re better off not watching TV at all.  Furthermore, the commercials are either hyping materialistic crap that we don’t need, processed food ladened with GMO’s, alcohol(ism) or some Big Pharma pill that will only place a symbolic bandage over the issue and will never cure you of anything.  The actors they use to sell these products ultimately are telling us that we are not pretty or handsome enough and that our lives would be so much better if we were like them.

This is the LITERAL programming we receive when we watch TV, yet millions of people would rather do that than to better themselves with a hobby or creating something that would benefit mankind.

Those in power want you to be as distracted as much as possible with no time to think critically or independently, about anything other than who won the recent sports game or the latest contestant on a reality show.

Where is the truth and who should I believe?

For those who watch too much TV:  Each day you waste by doing nothing to better yourself is one less day that you had an opportunity to grow in body, mind and spirit.

Instead of watching TV, spend time reading and researching material from the masters.  You can find a large quantity of esoteric texts here.

Instead of getting your news from the main stream media, go to alternative news websites such as The Meta-Center Chicago Alternative News to get the news that the mainstream media fails to report.

Sadly, most people will fight for the same system that has kept us all as economic slaves than to envision a world without money, government or religion.

Einstein is often quoted as saying, ” Insanity is doing the same thing over and over again but expecting different results.”  This is reminiscent of every election as they always boil down to the lesser of two evils… and you always end up with evil.

If you look hard enough, you can always find the truth but most people aren’t willing to spend the time doing so.  These are the same people who are content watching 3-5 hours of TV every day.

You’re always being guided to find the answers, whether that is through personal experiences or through the experiences of others.  Be open minded about everything you read and watch when researching and you will continue to follow your path of enlightenment.