This is my current complete collection of images of space anomalies. To the best of my knowledge, all of these pictures originally were released by NASA or JPL, with the exception of a few low res photos taken by the soviet lunar probe from the 1970’s, and a photo of the earth pyramid in Bosnia that doesn’t really belong in the folder but I’m going to leave anyway.

What do these images show?

These are photos of objects and structures that indicate intelligent design. Most of them appear to be ancient and in ruin. The vast majority of the images are from Mars, from the Opportunity and no longer functioning Spirit rovers, as well as the Mars global surveyor orbital satellite. Of the remaining images, most are from Earth’s moon, some from comet 67-p, one of an object on Eros, one of Buzz Aldrin’s ‘monolith’ on Phobos, two of the surface of Venus, and two objects captured by the ISS feed that look like craft (terrestrial craft, to my eyes – most likely classified and made by skunkworks. No need to assume aliens! Included because NASA refuses to comment on them). With or without official confirmation, it is entirely up to the viewer to decide if the images are artificial or natural, though in my experience even the most buttoned down of believers in the idea that we are alone and that no evidence from exploration of our system exists to suggest otherwise are at a loss to explain some of the things in the images presented here.

Do these photos prove the existence of aliens?

It would be a mistake to assume so. The simplest, most logical explanation is that in the distant past, humans had reached a level of technological development sufficient to colonize the solar system before being nearly wiped out, most likely by the same event that decimated Mars and left it a desert planet where once had been oceans. There are many natural and man made disasters that could wipe out our civilization and send the survivors back to the Stone Age, some of which we couldn’t have imagined a generation or two ago. It is quite possible, judging from these photos, that the human race originated from Mars instead of Earth.

Are these photos enhanced?

Some are. Most are magnified from the original source. Whenever possible, I have included multiple image views of the same object for comparison’s sake.

“Enhanced” means the images have been monkeyed with to make it seem like something instead of nothing.

It can mean that. For comparison I offer a ‘pareidolia’ if you will, of a sculpture in front of a cliff face. When I look at it I see a badly eroded figure of a human female with a baby at breast. ( 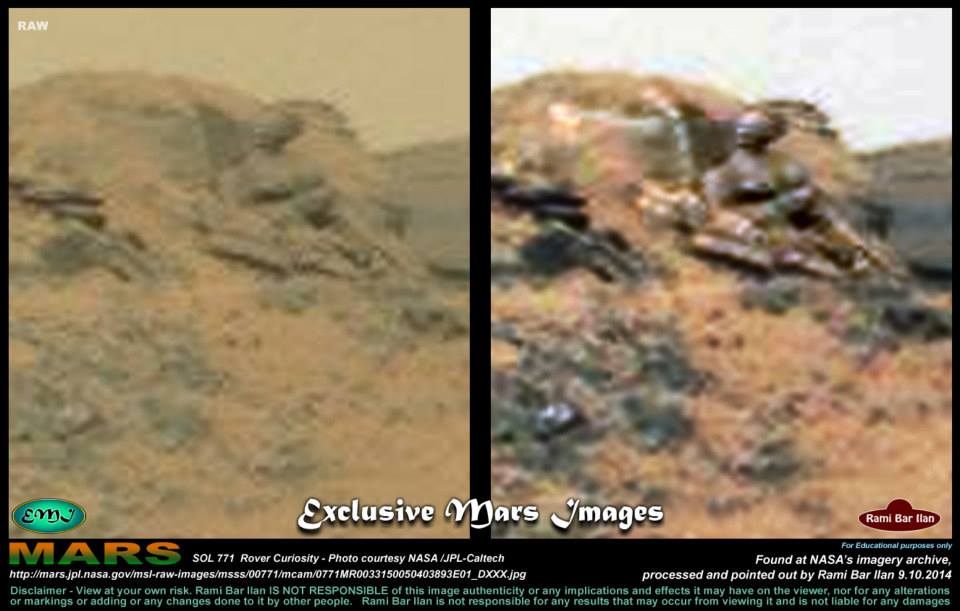 ) In the enhancement, I still see an ancient statue of a woman with babe at breast, but the picture has been cleaned up a bit. A different ‘enhancement’ from an overly enthusiastic online UFO rag reveals a painted scene of a buff blond Martian dude with the ‘baby’ morphed into a green lizard bursting out of his stomach(

). The picture makes a good contrast to the other, so I left it in.

What about the pareidolia argument? Aren’t you just seeing what you want to see?

Pareidolia doesn’t apply to geometry. Geometrical forms in images can easily be measured and confirmed. For the most part, the pareidolia argument was used against faces, starting with the original cydonia face imaged by the Viking orbiter in the 1970’s. The weight of argument for artificial constructs lies with the many instances of circles, squares, rectangles, spheres, cubes (boxes), isosceles and equilateral triangles, pyramids, tetrahedrons and other geometric forms. The number of perfectly aligned 90 degree angles forming vertices to be found from the rover photos alone is enough to make case for artificiality.

Are there photos of faces or figures here?

Yes. When I first began collecting images of anomalies, I deliberately avoided pictures of faces or of humanoid figures, focusing instead on geometry. Over time, however, the weight of compelling examples of faces or figures that were clear and in focus led me to decide that it would be a disservice not to include them. I draw no conclusions and make no claims about what these actually are.

Are you affiliated with the Mars Moon Space web group?

Where did you get these images?

Most from Facebook groups, some from websites found via google image searches for “Mars anomalies”, etc. In some cases I tracked down and cropped the image personally from the original NASA pics. A few others were taken directly from NASA sites as well.

These are just photos of rocks!

Yeah. Mostly. For an image to be included it had to have something interesting, but it could just be a rock with a 90 degree angle in a field of other ordinary looking rocks. If I had a talent for visual interpretation I might be working for a defence contractor analyzing satellite data. I don’t, something has to show up clearly for my untrained eye to see it.

How many images are there in the collection?

Over 1200 and counting, with more being added as I get them. I know there are doubles, but it would be too much work to sort through and delete them. The best ones should still catch the eye and appear artificial with a rapid scan of the thumbnails. At some point I may whittle them down to the 100 or so best ones and repost.

What do some of the most compelling ones show?

Buildings, most looking like ancient ruins or foundations, some looking modern and intact. Various pieces of decaying machinery, at least 3 small boat hulls, at least 3 rectangular ‘cave’ doorways cut into mountainsides, a wire brush, a handgun, cannon turrets and artillery pieces, military style helmets, tanks, symbols and letters etched into rock (the letter z appears multiple times), two examples of threaded machined screws, boxes crumbling as well as relatively intact, a metal finger ring with a setting for a stone, an object that looks like a toilet seat, another that resembles a birdhouse, two examples of an ornate sarcophagus, vehicles, plants, animal corpses, bones and footprints, water both running and stagnant, stairs, a spoon, an Egyptian ankh or Celtic cross, 3 Christian style crosses, numerous stone and glass spheres of various sizes, metal tubes and pipes, a shoe, artistic rock carvings of various subjects, many more broken bits and pieces of things whose function is unclear. The number 58 appears to show up in satellite photos of both Mars and our moon. If I had to pick a single image to make the argument for artificiality, it would be the orbital photo of the circular building with window bays jutting out from the top of a cliffside that closely resembles the Jupiter II spacecraft from the old Lost in Space TV series ( 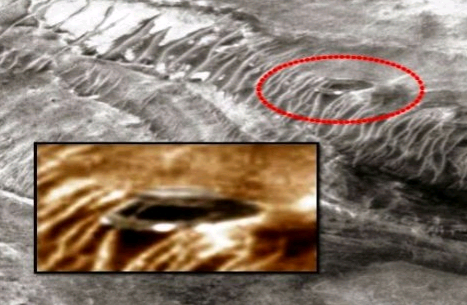 ) being circular, it often gets referred to as a “crashed UFO”). From the rover it would be the large instillation in the distance laid out in a distinct 90 degree angle at the foot of Mt.Sharp (

). Multiple images of both anomalies are included, adjusting the colour and contrast can really bring out the outlines of faraway buildings and is used often.

Why are you posting this?

I want answers. I want to know everything I can about this lost civilization. Even if the people who built these things were not human, the overwhelming evidence indicates we were and are more alike than unalike. Their history is our history. I think it’s time for the human race to grow up and face the truth about itself, whatever it may be, and start dealing with it. Considering the amount that this knowledge could disrupt all of human culture, it’s not surprising that the US government is remaining silent. Consider for a moment the effect of finding a vast archive of knowledge recovered from an ancestral space faring civilization and releasing it to the public would be. It would change everything, but I think it worth the potential risk. This is reclaiming our own heritage, and even if the majority of Earth’s people were to focus on learning about the extraterrestrial cultures of the ancient past (or present), interest in preserving our own terrestrial culture and history will never die out, as long as our civilization continues.

Only a few of these images have become well known and are generating interest online, hence this post. There are new ones being found every day, the curiosity rover is still working at this time. It is my hope that the best of these get widely distributed in the interest of creating serious debate among scientists and laypersons without accusations of being mentally deficient or sneering comments regarding tinfoil hats.