Posted on May 26, 2017 by Meta Center
Recent reviews
Events Calendar

Excavations at a five-million-year-old Tennessee sinkhole have yielded hundreds of snake bones, including the remains of an unusual new fossil species: Schubert’s Winged Serpent

Poring over hundreds of snake fossils excavated from an ancient eastern Tennessee sinkhole, paleontologists Steven Jasinski and David Moscato noticed bones that were unlike any other. They included vertebrae with broad wing-shaped projections coming out of the sides.

“When we first saw them, we knew they were unusual, but the feeling wasn’t so much, ‘Eureka!’ as it was, ‘What the heck is this?'” said Moscato, who is the programming coordinator at the Center for Science Teaching and Learning at East Tennessee State University. “Before we could be sure this was something new, we had to look at just about every similar species of snake we could think of, alive or extinct.”

The extensive investigation determined that the bones belonged to a new five-million-year-old fossil species, which the researchers named Zilantophis schuberti, or “Schubert’s Winged Serpent.” Their work was published in the Journal of Herpetology.

“Schubert” honors Blaine Schubert, the executive director of East Tennessee State’s Don Sundquist Center of Excellence in Paleontology. He was the adviser of both Jasinski and Moscato when they were students there.

The snake, which when alive measured about 12 to 16 inches long, did not have actual wings and therefore could not fly, yet it was a compact powerhouse. The researchers believe that the winged projections were likely attachment sites for back muscles. 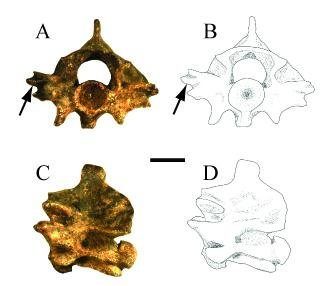 © University of Pennsylvania
Paleontologists identified the new species by unique characteristics of its vertebrae. The arrow notes the location of wing-like projections that gave the species its name.

“This may have allowed for a small snake that was relatively strong for its size and relatively flexible,” Jasinski said. “This could have been for being a predator or being better at living in its environment.”

The unusual features did not last long, however, in evolutionary time. “Those wing-like projections are probably something that evolved uniquely in Zilantophis and disappeared with it when it went extinct,” Moscato explained.

The new fossil species is thought to be most closely related to rat snakes and kingsnakes, both of which are relatively common in North America today. Schubert’s Winged Serpent had a unique life in and around the sinkhole, though. It lived in leaf litter on land close to the water that once filled the prehistoric depression.

The researchers suspect that the snake nabbed tiny fish in the water as well as insects, worms, and small amphibians. All were once plentiful at the location, named the Gray Fossil Site.

It has always been a snake-eat-snake world, so larger snakes could have preyed upon Schubert’s Winged Serpent, as well as birds of prey, large toads, and small mammals that were living at the time in what is now eastern Tennessee.

“Zilantophis would have had to make sure to stay out from under the feet of barrel-chested hornless rhinos, saber-toothed cats, shovel-tusked elephants, and the most abundant large animal at the site: tapirs,” Moscato said. “The site’s most famous animal, the red panda (Pristinailurus bristoli), was larger and more omnivorous than the modern-day version. It might even have made a grab for Zilantophis if given the chance!”

The snake holds clues to an important transitional time in the evolutionary history of these reptiles.

For millions of years, well into the Dinosaur Age, North America was once home to many ancient species of boas. After non-avian dinosaurs went extinct around 65 million years ago, boas were still going strong. That all began to change starting about 30 million years ago, when a gradual shift in the climate led to the replacement of many forests with grasslands.

“In North America, this shift gradually edged out the ‘old guard’ of boas, but was favorable for the kinds of snakes we have today,” Moscato said, noting that most of today’s snakes belong to the family Colubridae. Two-thirds of all known living snakes are colubrids, which are typically smaller than boas.

When boas were gradually “phased out,” they were pushed to the corners of what is now the US, and especially Florida, where several such species remain today.

Schubert’s Winged Serpent, on the other hand, is long gone, but the site that was once its home is alive with scientific activity.

“Excavations at the Gray Fossil Site are still on-going, and every year new discoveries are being made,” Jasinski said. “Some of these discoveries add to the knowledge of the animals already known from the site, but others continue to show new and exciting animals.”