‘They’ say cell phone signals pose no danger. ‘They’ also say more frequently that cell phone towers pose no danger and it’s all in the ‘heads’ of the people. Yet here on the north side of Chicago a cell tower was banned for construction for this very reason.

HUMBOLDT PARK — After strong opposition from neighbors, T-Mobile has agreed to ditch its controversial plan to construct cellular antennas atop a low-income housing building in Humboldt Park, according to Ald. Roberto Maldonado (26th).

In a Wednesday message to his constituents, Maldonado wrote on Twitter: “I am proud to announce that after several meetings with T-Mobile they have agreed to relocate the cellular antenna proposed for installation at 1152 N. Christiana Ave.”

Maldonado went on, saying, “I especially want to applaud the efforts of the community surrounding this proposed location. They voiced their strong opposition to this project through petitions, emails and and personal meetings with me.”

Maldonado said he asked T-Mobile as well as the city’s Department of Buildings to notify him of any future building permit applications for cellular antennas in the ward.

In March, several residents near the 1100 block of North Christiana Avenue spoke out against the antennas, saying they have health concerns about radio frequency emissions and fear the antennas could hurt property values. More than 100 neighbors signed a petition to stop the antennas from being constructed.

In the petition, resident Kurt Gippert argued there is “insufficient data” on the health impact of cellular towers, particularly when it comes to the elderly, sick, children, women and pets.

But the nonprofit that owns the building, Latin United Community Housing, contended the antennas do not pose a “discernable” health threat, and will benefit the community because the agency is getting a monthly stipend in the deal. 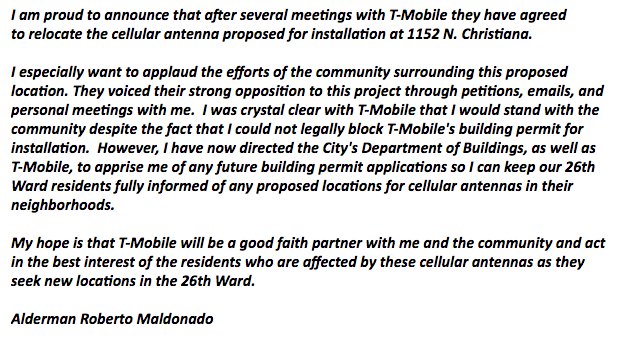 The organization said the money would’ve helped pay for programs that would’ve otherwise expired due to lack of funding like on-site gardening and low income housing tax credits.

The organization also said it conducted its own research on cellular antennas and concluded there is no link to human health or safety, and there are hundreds of similar existing antennas within a three-mile radius of the site.

“We are aware that there is misinformation circulating by a small group of opponents of affordable housing. This group has also been circulating a petition against the issuance of permits for this application as an obstruction to affordable housing programs,” the organization previously wrote in a prepared statement.