The stone kingdom of Great Zimbabwe

Great Zimbabwe was a 720-hectare (1,779 acres) city that flourished between roughly the 10th and 15th centuries A.D.

“Zimbabwe” is a Shona name that, while the translation varies, can mean houses of stone. The ruins contain numerous stone enclosures with soaring walls as tall as 11 meters (36 feet). They were made without the use of mortar.

Much of Great Zimbabwe is unexcavated and what the different enclosures were used for is a source of debate among archaeologists. The earliest written records for the city date to the 16th century, a time after it was largely abandoned.

Today, Great Zimbabwe is a UNESCO World Heritage Site and is considered a sort of national symbol for the modern-day country of Zimbabwe. The nation adopted the name Zimbabwe in 1980, using the name that the Shona had long before given to the city. Also the flag of Zimbabwe shows a bird sitting on a pedestal, which is a representation of a type of artifact found at Great Zimbabwe.

Despite the importance of Great Zimbabwe, much of it is unexcavated. “If we combine areas dug by antiquarians with those by professional archaeologists, it becomes clear that the excavated area at Great Zimbabwe is less than 2 percent,” wrote a team of scientists who are remapping the city in a paper published in 2016 in the Journal of Archaeological Method and Theory.

The remapping team found that the site encompassed about 720 hectares (1,779 acres) of land and that “its size at any given point in time was considerably smaller than the 720 ha, making up the site today,” they wrote in the journal article. They explained that different parts of the city were inhabited at different times and the earliest evidence for habitation dates to around A.D. 900. 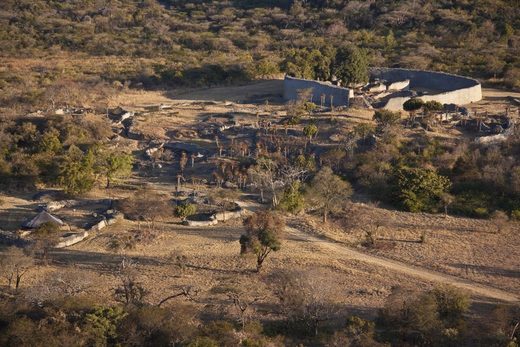 © 2630ben/Shutterstock
A view of a portion of Great Zimbabwe from a nearby hill.

Great Zimbabwe has never been a “lost” city; the people of Zimbabwe have always been aware of its ruins. However, when European explorers arrived in the area in the 19th and early 20th centuries, they took artifacts from the ruins of Great Zimbabwe and put forward claims that the city wasn’t built by Africans at all, claiming that it was built by the Phoenicians or other groups from Asia or Europe.

The earliest European to describe Great Zimbabwe was Karl Mauch (first name sometimes spelled Carl). He lived from 1837 to 1875 and claimed that he had found cedar from Lebanon at Great Zimbabwe and “that the ruins were built by the Queen of Sheba,” a character mentioned in the Hebrew Bible, wrote Innocent Pikirayi, a professor at the University of Pretoria (located in South Africa), in a paper published in the book Cities in the World, 1500 – 2000 (Society for Post-Medieval Archaeology, 2006).

Great Zimbabwe is located in “a tropical savanna climate” where “rainfall is received in October and persists well into April – May,” wrote a team of researchers in a paper published in 2016 in the South African Archaeological Bulletin. “Much of the rainfall around Great Zimbabwe comes in the form of mists, locally known as guti, that come with the southeast trade winds.”

The research team examined charcoal found at the site and discovered that the inhabitants used types of wood called Spirostachys africana and Colophospermum mopane, which may have been imported from other sites in southern Africa, to construct the city.

Research indicates that Great Zimbabwe declined in the 15th century; however, climate change was not a cause. “Recent research suggests environmental degradation may not have been primarily responsible for the abandonment of the town, as climatic conditions prevailing at the time were favourable,” wrote Pikirayi in his 2006 book. 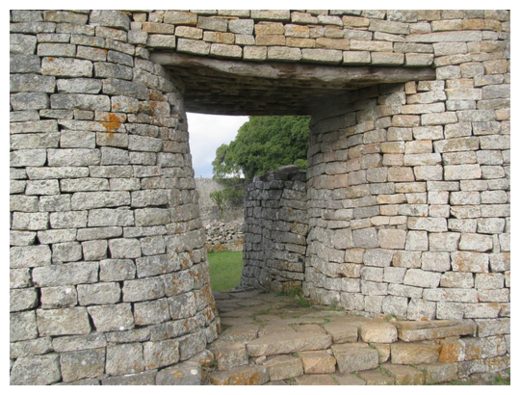 © Cecil Bo Dzwowa/Shutterstock
A close up of the main entrance that leads inside the main structure of Great Zimbabwe. The city was built without the use of mortar.

“The material culture from different areas [of Great Zimbabwe] regardless of time period mostly consisted of local pottery, imported glass beads, infrastructure for metalworking such as crucibles, finished metal objects, spindle whorls and, among others, grinding stones,” wrote the research team conducting the remapping of Great Zimbabwe in their 2016 Journal of Archaeological Method and Theory paper.

The most famous artifacts are eight birds, carved out of soapstone. They “are all about 33 cm [13 inches] in height and were once perched atop pedestals,” wrote Paul Hubbard, a researcher at the National Museum and Monuments of Zimbabwe, in a paper published in 2009 in the journal Honeyguide. 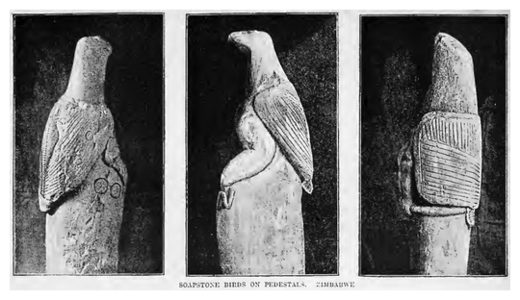 “Most researchers agree that the birds represent birds of prey but it is not possible to identify the species because the carvings combine human and avian elements; beaks with lips on some, and four or five toes or fingers on all,” wrote Hubbard.

Six of the eight birds were found in a place which modern-day archaeologists call the “Eastern Enclosure,” which is located on a hill.

“The Eastern Enclosure yielded meager amounts of cultural debris and the existence of platforms and monoliths has suggested the use of this enclosure for priestly functions,” wrote Shadreck Chirikure, a professor at the University of Cape Town, and Innocent Pikirayi in a paper published in 2008 in the journal Antiquity.

A number of artifacts obtained through long-distance trade have been found at Great Zimbabwe. These include a 14th-century Arab coin, the remains of 13th-century Persian pottery as well as pottery that dates to China’s Ming Dynasty (A.D. 1368-1644), wrote Webber Ndoro, the director of the African World Heritage Fund, in his book The Preservation of Great Zimbabwe: Your Monument Our Shrine (ICCROM, 2005). Ndoro notes that these artifacts would have been obtained through trade that occurred across the Indian Ocean and that Great Zimbabwe offered gold, among other products, that it could trade abroad.

The relationship between Great Zimbabwe and other cities in the region is also a source of debate. Some scholars think that Great Zimbabwe was the capital of a sizable kingdom or empire that included other cities, such as Thulamela, which is located in modern-day South Africa. However this idea is disputed. Another idea is that a dynasty of rulers from another city named Mapungubwe moved their capital to Great Zimbabwe in the 13th century.

With only 2 percent of Great Zimbabwe having been excavated, new discoveries may be made in the future that will shed light on the city’s history.