The most promising place to search for life outside our solar system just got even more enticing.

Last year, a research team operating the ESO’s Transiting Planets and Planetesimals Small Telescope, or TRAPPIST, discovered that a small, dim red dwarf star about 39 light-years away had three planets orbiting it. All three exoplanets were about the size of Earth and in the so-called “Goldilocks Zone” where temperatures can hover between 0 and 100 degrees C—the ideal conditions for liquid water and, perhaps, life.

The team, lead by Michaël Gillon of the STAR Institute at the University of Liège in Belgium, eagerly turned more telescopes toward TRAPPIST-1, including NASA’s Spitzer Space Telescope and the ESO’s Very Large Telescope. Now, a paper published today in Nature reveals that TRAPPIST-1 has not three but seven Earth-sized planets, six of which are likely rocky, and all seven could possibly support liquid water. 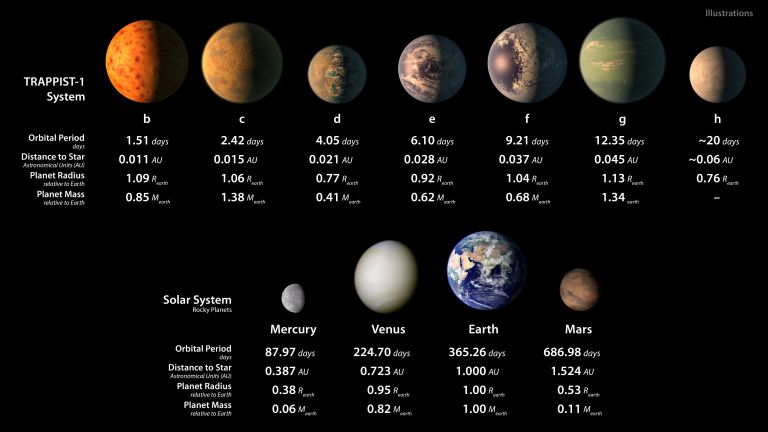 This chart shows, on the top row, artist conceptions of the seven planets of TRAPPIST-1 with their orbital periods, distances from their star, radii and masses as compared to those of Earth. The bottom row shows data about Mercury, Venus, Earth and Mars.
NASA/JPL-Caltech

“All of these planets are the best targets found so far to search for signs of life in the next decade, and it is remarkable that they are all transiting the same star,” co-author and MIT planetary scientist Julien de Wit told Popular Mechanics in an email. “This means that the system will allow us to study each planet in great depth, providing for the first time a rich perspective on a different planetary system than ours.”

TRAPPIST-1 is technically an ultracool dwarf star. This dim little star has only 8 percent of the mass of the sun, and temperatures are estimated around 2,550 Kelvin compared to 3,800 Kelvin for other red dwarfs and a scorching 5,800 Kelvin for our sun. In fact, TRAPPIST-1 is only slightly bigger than Jupiter.

The planets also pass very close to each other as they orbit. According to NASA: “If a person was standing on one of the planet’s surface, they could gaze up and potentially see geological features or clouds of neighboring worlds, which would sometimes appear larger than the moon in Earth’s sky.”

The measured orbital periods of the planets, compared with those of Jupiter’s Galilean moons and the four inner planets of the Solar System. The sizes of all the objects are approximately to scale.
Nature

Some of the planets are more optimally positioned to support liquid water than others. The star has been dubbed TRAPPIST-1A, and the planets, from innermost to outermost, are 1b, 1c, 1d, 1e, 1f, 1g, and 1h. TRAPPIST-1b, 1c, and 1d are probably too close and too hot for water. TRAPPIST-1h is probably too far away and too cold. But TRAPPIST-1e, 1f, and 1g are right in the middle of that Goldilocks Zone. For all we know they are veritable paradise worlds with rolling oceans and sprawling forests. (Okay, probably not, but it’s not impossible.)

That said, we know very little about these planets, almost nothing beyond estimates for their size, distance from the host star, and orbital periods. We can detect exoplanets when they transit their host stars, meaning they move in front of the star from our perspective and block some of the light that reaches our telescopes. From the resulting dip in the star’s brightness, we can deduce the presence of planets and even their size.

Red dwarfs, such as TRAPPIST-1, make for great stars to search because they are already dim, making any change in brightness easier to detect. Planets orbiting dwarf stars generally have short orbital periods, making an entire trip around in weeks or even days, so there is plenty of opportunity to catch them moving across the face of the star. (The TRAPPIST-1 planets orbit their star in anywhere from 1.5 to about 20 days).

Red dwarfs are also the most common and longest-living stars in the galaxy. An estimated 85 percent of the 100 billion stars in the Milky Way are red dwarfs. TRAPPIST-1 will continue slowly burning hydrogen for another 10 trillion years, 700 times longer than the entire history of the universe—plenty of time for life to take root and evolve. 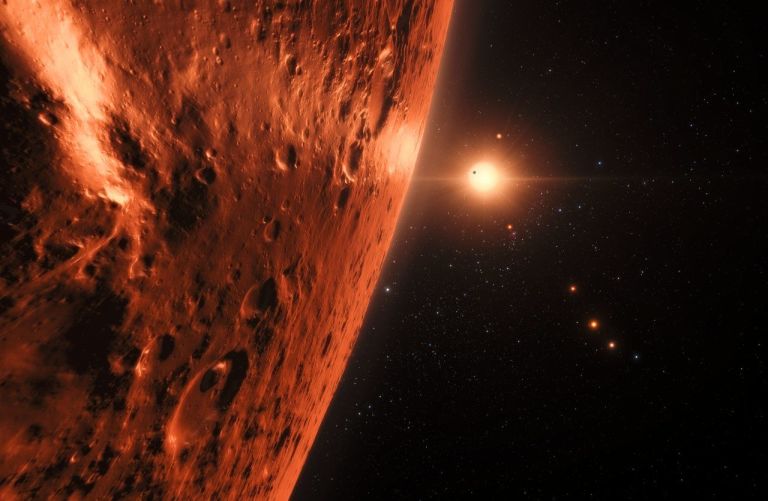 Artist’s impression of view from planet in the TRAPPIST-1 planetary system.
ESO/M. Kornmesser

These worlds, as exciting as they are, have a few properties that call their potential habitability into question. For one thing, the planets are likely tidally locked with TRAPPIST-1, meaning the same face of the planet is always facing the star, just like one half of the moon always faces the Earth. If this is the case, one side of each planets experiences perpetual daylight while the opposite side is stuck in an endless night.

Another concern is that red dwarfs can be particularly active stars with stellar eruptions, flares, and coronal mass ejections bombarding the nearby planets with radiation. A recent study casts doubt on the habitability of the closest exoplanet to Earth, Proxima b, for this reason. That said, TRAPPIST-1 is a cooler star than Proxima Centauri, and it might not rain down high-energy particles on its planets so relentlessly.

“To the best of our knowledge, TRAPPIST-1 appears particularly quiet,” says de Wit.

It may be that TRAPPIST-1 is a gentle, life-giving star after all. But it’s almost 40 light-years away, particularly small and exceedingly dim. How do we find out for sure?

PROBING THE ATMOSPHERES OF EXOPLANETS

There is a developing plan to launch small nanoprobes to the Alpha Centauri system, the closest stars to us, known as Breakthrough Starshot. With a network of large lasers on Earth, it just might be possible to accelerate a probe to roughly 20 percent the speed of light by constantly hitting a reflective surface with the concentrated beams of light. This technology, known as photonic propulsion, could allow us to reach Alpha Centauri in 20 or 30 years.

But we’re not going to TRAPPIST-1 anytime soon. It’s about eight times farther away than Alpha Centauri. Even if we could launch a probe at relativistic speeds, it would take two centuries to get there, the immense distance makes it unlikely that it would arrive at all. Even if it did, detecting a signal from a small nanoprobe 40 light-years away would be darn near impossible. For now, we need to study the TRAPPIST system from home. 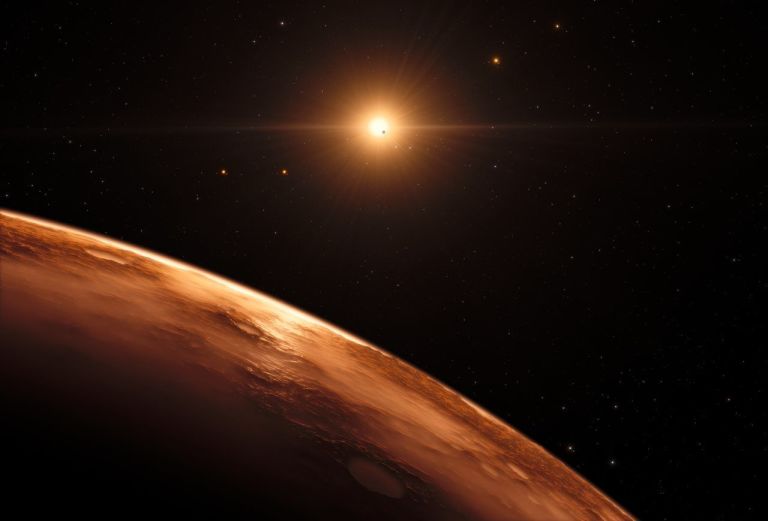 We can do more with our telescopes than you might think, especially new ones expected to go online in the 2020s. By imaging the light that passes through an exoplanet’s atmosphere, we can look for gaps in the electromagnetic spectrum—wavelengths of light that are absorbed by the presence of specific elements. This technique, called absorption spectroscopy, can tell us the composition of a planet’s atmosphere, even 40 light-years away.

“There is a lot to be done with what we already have and what we are about to have!” says de Wit in regard to telescopes. “With observations of this system taken by Hubble last May, we have already ruled out the presence of puffy, hydrogen-dominated atmospheres around the two innermost planets, which means that they are not ‘mini-Neptunes’ that would be uninhabitable, but are terrestrial like Mercury, Venus, Earth and Mars.”

The launch of the James Webb Space Telescope (JWST) next year and the completion of the Giant Magellan Telescope (GMT) in the high Atacama Desert of Chile will give us a clearer picture of these exoplanets than ever before. James Webb’s 18, gold-plated mirrors will detect objects 16 times fainter than Hubble, and the gargantuan GMT, with seven 15-ton mirrors, should be capable of imaging exoplanets directly rather than looking for dips in a star’s brightness. These two scopes, along with others such as the European Extremely Large Telescope, will tell us exactly what kind of atmospheres the TRAPPIST-1 planets have.

“Over the next two years, we are hoping to leverage Hubble’s capabilities to search for the presence of water- or methane-dominated atmospheres,” says de Wit. “In the future, upcoming observatories like the James Webb Space Telescope will help us constrain the planets’ atmospheric composition, temperature, and pressure profiles—all essential information for determining the surface conditions possible over their globes.”

This information will not provide clear-cut proof, but it could provide substantial visual evidence if one of these planets does in fact support life. Astronomers will be searching for “biosignatures,” such as high levels of oxygen that could be the result of photosynthesis. Abundant oxygen isn’t enough to determine the presence of life, though.

“We need more than just O2,” says de Wit. “Biosignatures can appear in many forms from complex molecules like CFCs [chlorofluorocarbons] or mixes of molecules such as H2O, O2/O3, CO2 or CH4. JWST may not provide sufficient evidence to prove the presence of a biomass by itself, but it will inform us on the habitability of the planets.”

Though the TRAPPIST-1 system is too far away for a probe, it is wonderfully close on a galactic scale. With the planets orbiting their sun every few days, we will have hundreds of opportunities to observe these tantalizing worlds with our ever-improving telescopes. What’s more, many astronomers believe that TRAPPIST-1 might not be an anomaly at all, but that thousands of nearby red dwarfs and other stars have extensive planetary systems.

It’s hard not to think that somewhere, one of those planets harbors lush alien gardens, and with continued science like this, we are going to find it. 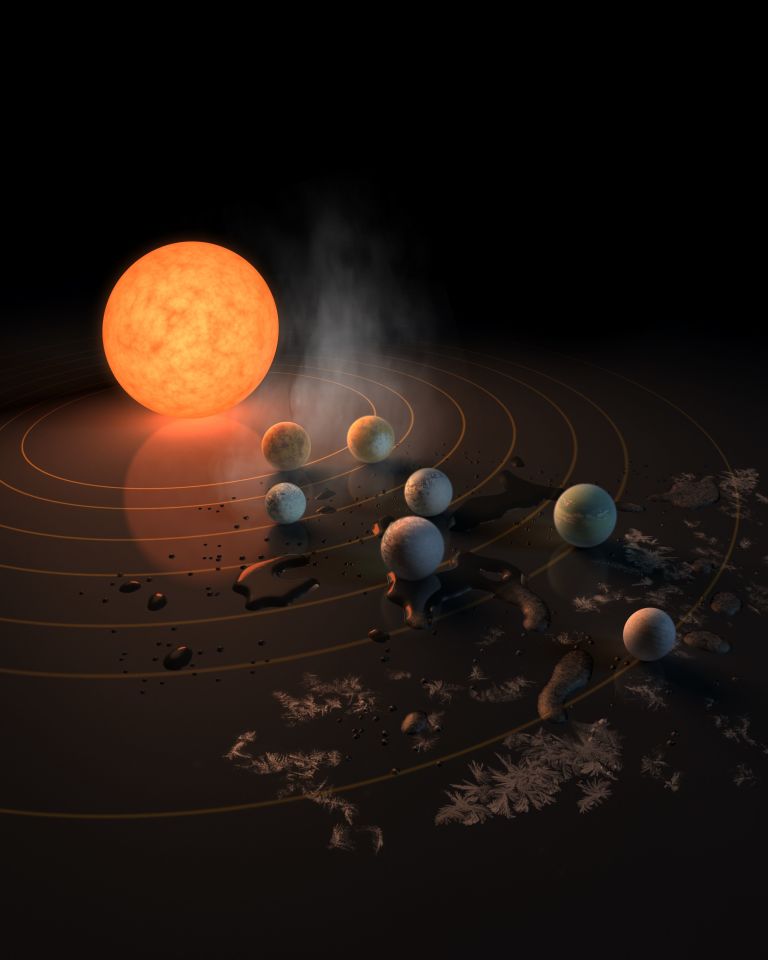 The TRAPPIST-1 star, an ultracool dwarf, and seven Earth-size planets orbiting it.
NASA/JPL-Caltech