While many films have fascinating backstories or apparent curses associated with them, some are said to contain very real warnings and predictions hidden in plain sight in their backdrops. Although these apparent “warnings” and hidden messages need to be taken with a considerable pinch of salt, the thought process, as well as how the apparent “connections” are made, are remarkable and interesting in themselves. A lot of these claims can quite convincingly be dismissed as pure coincidence no doubt, but at what point does coincidence become evidence – as crazy the “evidence” might sound?

Perhaps even more intriguing, is that some of these warnings appear to have been the product of prior knowledge to certain events. Again these assertions are pure speculation, but they make for interesting reading, and are perhaps worth keeping on the back-burners of our minds at the very least. 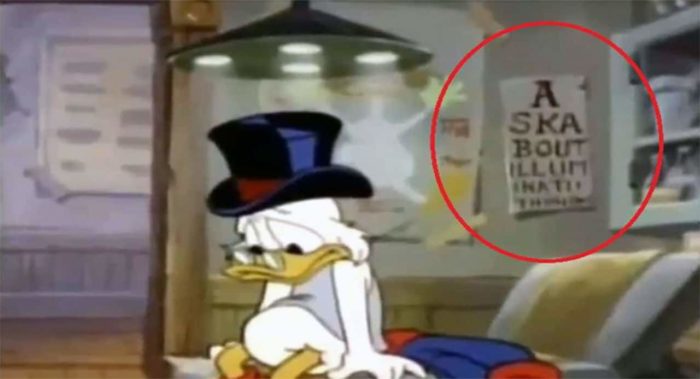 In the film “The Dark Knight Rises” for example, at 1 hour and 58 minutes into the movie, while predicting the location of an upcoming crime, a section called “Sandy Hook” is clearly pointed out. What’s more, this section of the fictional “Gotham City” was not called by this name in previous films in the series. Was this a warning of an upcoming event from one unknown power player to another that only they would know to look for?

Or perhaps it is worth taking note of an episode of Disney’s “Duck Tales” in which a sign – again hidden in plain sight – reads, “Ask About Illuminati”, on what appears to be an eye chart on the doctor’s wall. Is this a warning that we should be concerned about such a group? Or is it simply someone poking fun?

One event in recent history has come under more scrutiny than most as having been predicted in such a manner. Before we look at that though, the video below is a quick rundown of the top ten films with hidden messages that predicted the future. Make of the claims what you will.

Perhaps predictably, maybe even understandably given the many questions that still surround it, the events of September 11th 2001 are also claimed to have been discreetly predicted in various blockbuster movies over the years.

In the 1999 film, “The Matrix”, the main character, Neo, had his passport highlighted by eagle-eyed viewers. The date it is due to expire is clearly seen as September 11th 2001.

During a scene in the second instalment of “The Terminator” series, released in 1991, just prior to a truck being driven into a bridge that it is too short for it to pass through, appears a warning of the maximum height for vehicles. The sign, clearly visible in the shot, reads: “CAUTION 9 11”.

Even the 1993 “Super Mario Bros” movie seemed to tip its hat to the upcoming tragedy, when a scene towards the end of the film shows two dimensions merging together. As they do so, the Twin Towers – which are plainly visible – disintegrate temporarily to the ground. If that wasn’t enough, as they do so, a plane flies where the tower would have been, seemingly in a replica of the events that were still eight years away.

Again it is easy to brush these aside as coincidence and nothing more. However when you see them so clearly again and again, in films released before the events themselves to boot, at the very least it makes you wonder, if only slightly.

One particular and hugely successful blockbuster trilogy apparently offered warnings of the 9/11 events more than any other. Before we look at those particular movies though, the short video below looks at various clips from cartoons and movies over the years that some claim show “warnings” of the 9/11 incident.

VIDEO: Was 911 Predicted in Cartoons and Movies Years ahead of Time?

Back To The Future – An Intricate Warning Of Horrific Events To Come?

One film series that has seemingly come in for deep analysis by those who subscribe to such beliefs of hidden agendas and Illuminati symbolism, is the “Back To The Future” trilogy. The connections, symbols, and references to 9/11 are very much open to interpretation. That being said, they do seem to come up repeatedly, and even interpretation has to have something to interpret in the first place.

Researchers into this theory site that there are multiple displays of the numbers “911” throughout the films, as well as references to the Twin Towers.

Towards the end of the first film, where Marty shouts up to Doc. Brown that he “has to warn him about the future”, the hands of the clock are set on the 9 and the 11. Furthermore, when the bolt of lightning hits the clock tower a few moments later, the time is 9:59 – the time that the first of the Twin Towers fell in 2001 was 9:59 am.

In the second movie, in Marty’s “future” house, the Twin Towers are seen on a “hologram window” that is designed to show scenery instead of just a window. As the image flickers, if you were to turn the frame upside down, it appears as though the towers are falling.

Back in the first film, another example of the Twin Towers being referenced is when Marty first arrives at Twin Pines Mall. The digital clock shows the time as 1:16 am. If this is flipped upside down, it reads 9:11. What’s more, when Marty arrives at the same Mall after returning from 1955, it is now called Lone Pine Mall. This is said to be a reference to the loss of the Twin Towers, and them being replaced by the lone Peace Tower. The fact this particular scene in the Twin Pines Mall is also host to a “terrorist” attack, is all but proof to some that it is meant as a dire warning.

The Two videos below both look at the hidden messages concerning 9/11 in the famous trilogy in a lot more detail. While they both speak of similar things, both also offer very different perspectives, the second one even offering theories, that connect the Back To The Future films with Zemekis’s recent work, The Walk.

VIDEO: BACK TO THE FUTURE 9/11 prediction

VIDEO: BACK TO THE FUTURE predicts 9/11

Hollywood – The Playground Of The Freemasons And The Illuminati?

Hollywood has always come with warnings of a dark underbelly that runs in parallel to the apparent glitz and glamour. Some take these tales as perhaps metaphoric warnings of the consequences of chasing fame and fortune at the expense of others, and even oneself. Some though have taken such warnings much more at face value, and believe the Hollywood and Disney film industries are run by elite secret societies such as the Freemasons and in turn, the Illuminati.

What’s more, it is these groups that ensure the appearance of symbols in such blockbuster films and popular television shows. According to such theories, it is partly an arrogant, mocking of the public that they include such references to events like 9/11, and partly a means of communication and ritual between themselves.

These assertions take an even darker turn when considered alongside accusations like those from Roseanne Barr that we covered in our MKULTRA article, and even more so when Corey Feldman’s claims of child abuse rings in Hollywood, rings that he says he himself was a victim of at the hands of the “elite!”

The references and symbols used in many big film productions for the most part are very real and not just seen by a few people with overactive imaginations. Whether their presence is indeed sinister, or simply just to satisfy the artist’s amusement is the question that is debated.

The video below looks at some of the symbols that are often connected with the Illuminati and how they are included in numerous big budget movies.

The Power Of Television And The Silver Screen

If writer and director of the Back To The Future films, Robert Zemekis, or any of the writers, directors and producers involved with other such films, were trying to get information to the wider public through their work, aside from asking why, perhaps we should ask, how did they become privy to such “secret” knowledge in the first place?

It is no secret that the world of Hollywood and the big guns that inhabit it, is a world quite different from the one that most of us reside in. It is a world where some people have more influence than most could possibly imagine, and with that influence, or perhaps even as a result of it, is access to information reserved for only a very select few.

Perhaps there is good reason that many people, over many years have stated that such groups as the Illuminati treat Hollywood as their playground, where they use the medium of the silver screen to not just tell stories and entertain, but to sway the will of the public themselves. They essentially have their audience under a self-imposed, subconscious form of mind control.

Jim Morrison’s famous quote of “Whoever controls the media, control the mind” should perhaps be taken a little more seriously than a flippant, throw-away line.

Morrison, himself studying to be a filmmaker leading up to the success of The Doors, was certainly a perceptive person. Given that the 1960s also witnessed the beginnings of the television becoming a “must-have” item in most homes in the western world, Morrison was perhaps well placed to make his claim, and no doubt saw first-hand the effects of such a device, and indeed his own fame as a result of it, on the general public.

The video below is an expanded look at these apparent symbols that are left within such media. It looks at the Back To The Future movies, but also includes other predictions and theories that take us right up until the present day – check it out, and make your own mind up.

VIDEO: The Occult Of Back To The Future – Biff Tannen Is Donald Trump