Neil Harbisson hacked his body and says he feels closer than ever to nature.

Neil Harbisson was born color blind, with a condition known as achromatopsia. He sees the world in grayscale, a drab range of blacks and whites, never to know the deep indigo of a Pacific wave, the magnificent red of a hummingbird’s throat, the iridescent carapace of a jewel beetle, the crystalline orange of sorbet.

Unsatisfied with his natural-born abilities, Harbisson hacked his body. He had an antenna implanted in the bone of his skull designed to convert color into sound. It took him three years, but he was able to memorize the microtones created by all 360 degrees of the color wheel. Once he mastered that, he added infrared and ultraviolet wavelengths to his repertoire.

He said he knew he had fully assimilated to the device when he began to dream in color.

“My brain hears colors in my sleep,” he told the audience in attendance at this year’s first annual BodyHacking Conference in Austin, Tex.

Although Discovery News had written about Harbisson in 2014, he had plenty more to say.

What most folks at this conference understood best was that the body was made to be hacked, modified and improved upon. The so-called transhumanism movement is filled with people who want to use technology to enhance their intellectual, physical, and psychological condition.

Harbisson, one of the forerunners of this movement, is considered the world’s first cyborg and in fact is the first person ever to have his technological attachment appear in a passport photo.

The antenna he wears is permanently affixed to this skull and delivers sonic information to his inner ear via bone conduction. Now, everything is a note. He dresses in chords (not cords) — think F sharp, C major and D minor. He redecorated his home to sound better and he hears grocery stores, paintings, faces and even entire cities.

As an artist, Harbisson uses his antenna to create new forms of art. He has found a way to share his ability with the rest of us. Not only has he transformed the sound he hears into visual representations (see below), but we can use his Eyeborg App (available from Android) to listen to color. 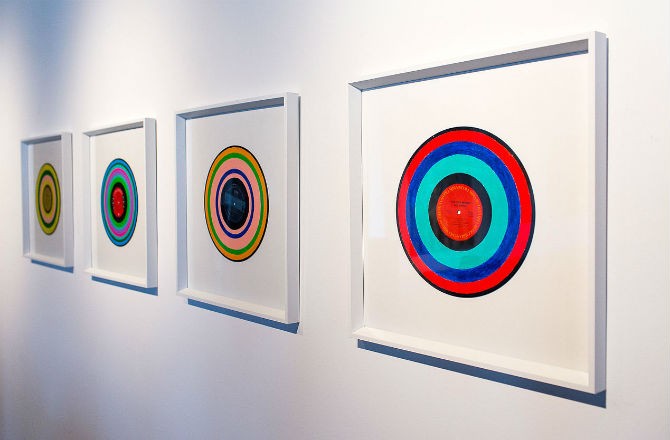 The antenna has an Internet connection, too, that ties him to five different people around the world. They each have the ability to send him audio images, sounds or videos.

Like all Wi-Fi routers, Harbisson appendage risked being hacked and one time someone broke in and sent him an illicit message.

“I liked being hacked,” he told the audience to their great enthusiasm. They laughed and clapped.

His most recent collaboration with pastry chef Jordi Roca is the Dish Player, which will allow people to hear the sound of food on a plate.

Harbisson’s art is not limited to Earth, either. His antenna has been linked to a satellite since 2014 and he receives a live stream from the International Space Station.

“Space is very noisy and overwhelming,” he told the audience. It’s filled with ultraviolet light, which is very high-pitched. But over time he hopes to train his brain to hear it and by 2017, he wants to have a permanent connection to space.

In the end, Harbisson told the audience that although he is part machine, he feels an intimate connection to Earth. “Becoming cyborg is becoming closer to nature, like insects or cats, who can see infrared,” he said.

In an ironic twist, the cyborg may be closer to the natural world than either you or I.